1. talking… myself out of buying a fantastic red statement couch for the office… to replace the fantastic red statement chair I bought for the office, and deeply regretted approximately two months later.
2. looking… forward to Captain Marvel. (I’m going this evening, and I’m giddy.)
3. loving… some of the photos I’ve been taking this week. It’s been a very good few days.
4. shovelling… snow. Twice in one day. The second time, in the rain.
5. sleeping… in. Sort of. Technically. This is the one day a year that the cat lets me.
6. daydreaming… about travel. I’m having a serious wanderlust moment right now.
7. approaching… the end of this draft of Violet Lane, and I’m really loving it. And I’m on track to meet my end-of-month deadline. (Assuming the final setpiece doesn’t give me as much trouble as the midpoint did… but even if it does, I think I have time to figure it out.)
8. figuring… out how to make all the intense writing sessions I’ve been doing fit into the rest of my schedule.
9. troubleshooting… my sourdough starter. I’ve figured out why it wasn’t working; the next attempt should be a winner.
10. falling… down some really fun research rabbit holes.

I was all ready to say I’d made it through ten days without falling back on a cat photo… but then I realized I did take a picture of Lucy.

Ah well. What’s the internet for, if not cat photos?

END_OF_DOCUMENT_TOKEN_TO_BE_REPLACED

This is where things start to get tricky. I’ve been taking photos every day for three weeks, and… I’m starting to run out of ideas.

END_OF_DOCUMENT_TOKEN_TO_BE_REPLACED

1. thinking… about trying my hand at short stories again. Maybe.
2. stocking… up on sketchbooks.
3. accepting… the fact that I need a new desk chair. Something that at least acknowledges the concept of ergonomics. (Fine. But why do they all look so terrible?)
4. wondering… how I’m going to get through the current stack of library books in three weeks. (Literally all my holds became available at once.)
5. eating… blood oranges. So few foods are truly seasonal anymore, it’s always a bit of a treat to find the things that really are only available for a couple of weeks.
6. making… my sourdough starter. I’ve been threatening to do it for months, and I’ve finally started. I’ll let you know how it goes.
7. standing… around in the most miserable weather of the winter, waiting for a bus that was a full hour late.
8. getting… back to that decluttering project.
9. trying… to find desktop wallpaper that I don’t hate. Still. I’m ridiculously picky about this kind of thing. When I do manage to find something that meets all my criteria—not too bright or too dark (unless it’s for mobile, in which case the darker the better), not too busy, quotes are good if they’re not too twee, I’m not a fan of brush lettering—I end up leaving it up until I’m thoroughly sick of it and desperate for something new, and… well. Here we are.
10. looking… forward to getting my days back this week.

I still don’t know what possessed me to try a 365 project in 2017. When I started, I was pretty sure it would turn out like the attempts I’d made before: three months in, I’d be taking the most boring snapshots in the world, simply to fulfil the obligation. I didn’t think that I’d make it through the year without getting bored or resentful, and I definitely didn’t think that the project would do as much for my photography in general as it did.

Were all my photos good? Of course not. I phoned in a bunch of them, even this last week. But I can see a marked difference between the photos I was taking in January, the ones I was taking in July, and the ones I’m taking now, and I’m really happy with how far I’ve come.

A big part of it, I’m sure, is just the fact that I was sharing the photos—the ones that I loved, and the ones that were, frankly, embarrassing. Getting some kind of feedback (whether it was full-on comments, or just a few likes) has done wonders for my confidence as a photographer, which in turn has pushed me to try a little bit harder with every photograph. (Or almost every photograph. Some days, I’m still lazy and uninspired.)

There’s a lot to be said for not creating art in a vacuum.

Now that this particular project is over, what’s next?

I’m going to keep taking a picture every day, and posting it to Instagram, but I’m not calling it an official 365 project. (I’ll keep posting the photos here, too, but I’m going to move to a monthly roundup, instead of weekly.)

The big problem I ran into this year was that the every-single-day aspect meant that sometimes I was taking pictures just to fulfil the obligation, and I wasn’t happy with the results. By the time November rolled around, I wanted something that was more of a creative challenge, but less of a chore.

In 2018, I’m going to give myself some leeway when I’m sick, or uninspired, or whatever. I’m still going to try for every day, but if I can manage at least five days a week, I’m going to call it a win. And I’m going to break the year down into smaller, more challenging projects, things that will push me either creatively or technically.

I don’t know what all of those projects are yet. I’ll probably limit myself to a single camera or lens for a month, and I’ll do a month of black-and-white, and I’ll find a few more things to do as the year goes on. (I’d also really like to work on my portraiture…. If you’re near Nova Scotia and might be interested, get in touch.)

I’m going to keep going. I’ve enjoyed this project too much to stop now.

Not all of them, of course. I phoned it in a couple of days, as usual. But the frost photo might be one of my favourite pictures of the year, and I love the Christmas light bokeh, and… I’m kind of in a black-and-white mood lately, and that’s wonderful.

1. rebuilding… my routines. Slowly. (And, let’s face it—this week was one big speed bump.)
2. figuring… out the giant painting that I’ve been planning… pretty much forever. I think it’s starting to make sense to me now.
3. feeling… gutted. Still.
4. sorting… through a lot of meaningless fluff to find the information I need.
5. thinking… about next-steps and long term plans.
6. wondering… if I should dye my hair again. I’m tempted. I don’t even know what colour I’m thinking about, just that I’m bored.
7. waiting… for the new Suede album. I really need this right now.
8. daydreaming… about Copenhagen. Not sure why, but I’ve bumped it up a few notches on my ‘to visit’ list.
9. rereading… Make Good Art. I’d been planning to anyway, just as a refresher, but… yeah. Again: I needed it this week.
10. breaking… out the heavy-duty winter coat. A little depressing, but it’s January, so…

Sorry I’m late. Technical difficulties. I had a photo to go with this post, but the computer is being really stubborn about importing photos from the camera at the moment. Next time. Promise.

1. finalizing… my plans for the year. Stay tuned.
2. considering… backup options. I’m not sure whether I want to buy a new drive, or go with a cloud-based option. (Fascinating, I know.)
3. looking… for a good recipe for hot cross buns. (The last time I tried making them, years ago now, I lost my bread-making mojo for a year. Which is kind of hilarious, actually. But I don’t trust that particular recipe anymore.)
4. enduring… the noise while ice is chipped off the roof.
5. feeling… a little overwhelmed.
6. starting… two new projects.
7. loving… having short hair again. I always forget how much more fun it is. (Even though I can’t really do anything with it.)
8. finding… new podcasts to listen to.
9. getting… frustrated. Stupid technology. (The DVR is on its way out. Fingers crossed, I can catch up on the shows I have saved before it dies completely.)
10. stocking… up on the basics.

1. getting… snowed in. At least once, and possibly again this coming week.
2. thinking… too far ahead, probably.
3. trying… to get back on schedule. (These last few weeks… ugh.)
4. working… out the logistics of some of my plans for this year. (It’s going well!)
5. looking… for a very specific song… that may or may not actually exist. It’s more an emotional thing than a song-stuck-in-my-head thing. I’ll know it when I hear it.
6. taking… a break from baking for a while. (Though I might already know what I’m going to make for dessert at Easter.)
7. waiting… patiently. Or not.
8. daydreaming… that’s it. Just… daydreaming.
9. reading… nonfiction, pretty much exclusively. Haven’t been in the mood for novels at all, for some reason.
10. feeling… a little better than before. 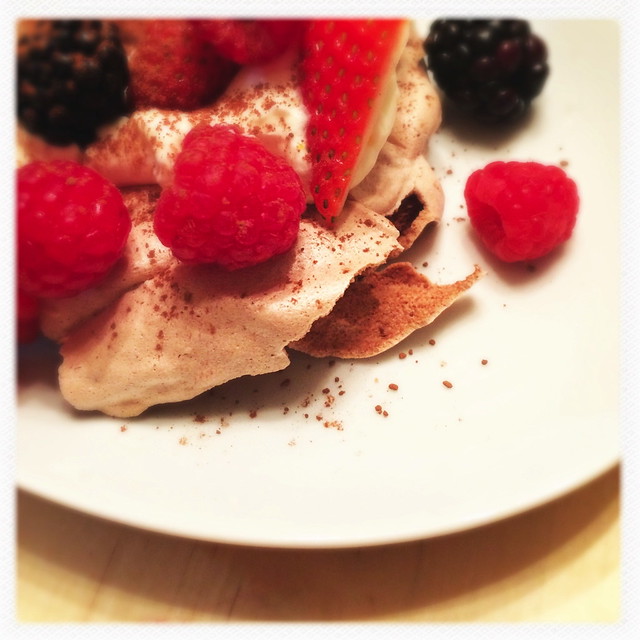 Happy New Year! It’s been a busy couple of weeks, and I’m really looking forward to slowing down a little. In the meantime…

1. getting… organized.
2. looking… at Warhol Polaroids. And rats. Fantastic way to start the year.
3. thinking… about what to do next
4. playing… with new toys.
5. making… this chocolate pavlova. So good. (And can we just take a minute to marvel at the impossibility of finding raspberries this perfect in December? I still don’t believe it.)
6. feeling… the cold. I probably shouldn’t have said anything about how it wasn’t feeling like winter yet.
7. hoping… to get back into my routine soon.
8. geeking… out over statistics.
9. freaking… out a little bit. 😦
10. reading… Information Doesn’t Want to Be Free: Laws for the Internet Age by Cory Doctorow.