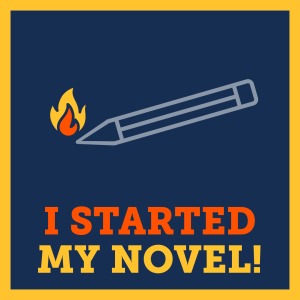 So… this hasn’t been the best week.

They were supposed to test the fire alarms in my building on Monday, which meant that I couldn’t try to sleep off the cold that was dragging me down. (The last thing I needed when I was running a bit of a fever was to wake up to a fire alarm.)

They didn’t test the alarms on Monday.

I did manage to get some rest on Tuesday, and by Wednesday night I was finally feeling like I might be past the worst of my cold.

The first day of NaNoWriMo was good! The writing took a little longer than I’d hoped, but exactly as long as I’d planned, and everything was working beautifully.

This morning, of course, they’ve been testing the fire alarms. Except they’ve been really unclear on the actual schedule, so I’ve got to be prepared for the fire alarm to go off at random times throughout the day. And they forgot to tell the fire department about the tests being moved from Monday, so… there was a fire truck, too. Lights and everything. (I’ve got a love/hate relationship with the NaNo streak badges right now.)

This hasn’t been a very good writing day.

I got a few hundred words in. I’m going to try to get a few hundred more in at some point today, but I’m really not feeling it. I’m not even sure if they’ve finished the tests—the truck from the alarm company is still outside, and I won’t know for sure until it leaves.

Still. A few bad days won’t derail the month, and everything should be back to normal by tomorrow. (Except for the work they’re doing on the balconies.)